Everything you need for turbocharging your modern product development

After being unsatisfied with various online Sample Size calculators, we decided to build our own: https://www.statsig.com/calculator. Unlike other calculators, ours can handle different group proportions (e.g. 20/80 ratios) and we’re excited to share our methodology in this blog post.

For me, the final straw was not finding any solution to calculating sample sizes for imbalanced tests (eg. 20% test and 80% control) which are becoming the norm. Deriving these equations was fun and I’m happy to share them here. 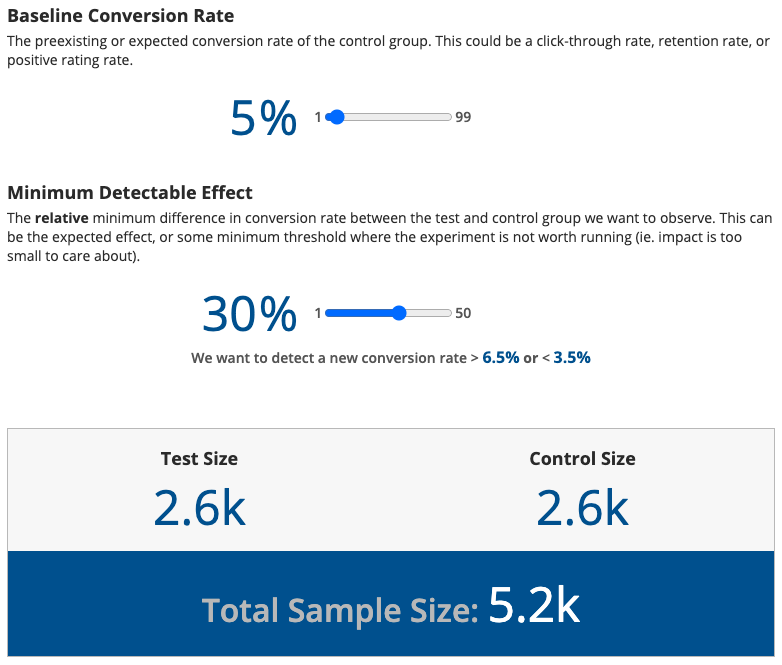 Why Calculating Sample Sizes is Critical

Calculating the required sample size for an A/B Test (also known as a split test or bucket test) helps you run a properly powered experiment. Just like you would check your gas tank before a road trip, you want to check your sample sizes before launching an experiment. Too few samples (users) and you won’t likely see the effect. Too many samples and you risk exposing a bad test to too many users for too long while slowing your team’s pace.

Setting Your Test Up for Success

As A/B testing is subject to randomness, we need to limit two types of errors:

1. Type I errors are the chance that given no experimental effect we will still detect a statistical difference through randomness. This is referred to as significance level (⍺) and is commonly set to 0.05 (or a 5% chance).

MDE is the smallest effect you want to observe in an experiment. While any positive effect is good news, smaller effects are harder to measure and require more samples and time. Lengthy and large tests with small effects are generally not worth running. Knowing this helps you set a reasonable MDE and determine whether an experiment is worthwhile. 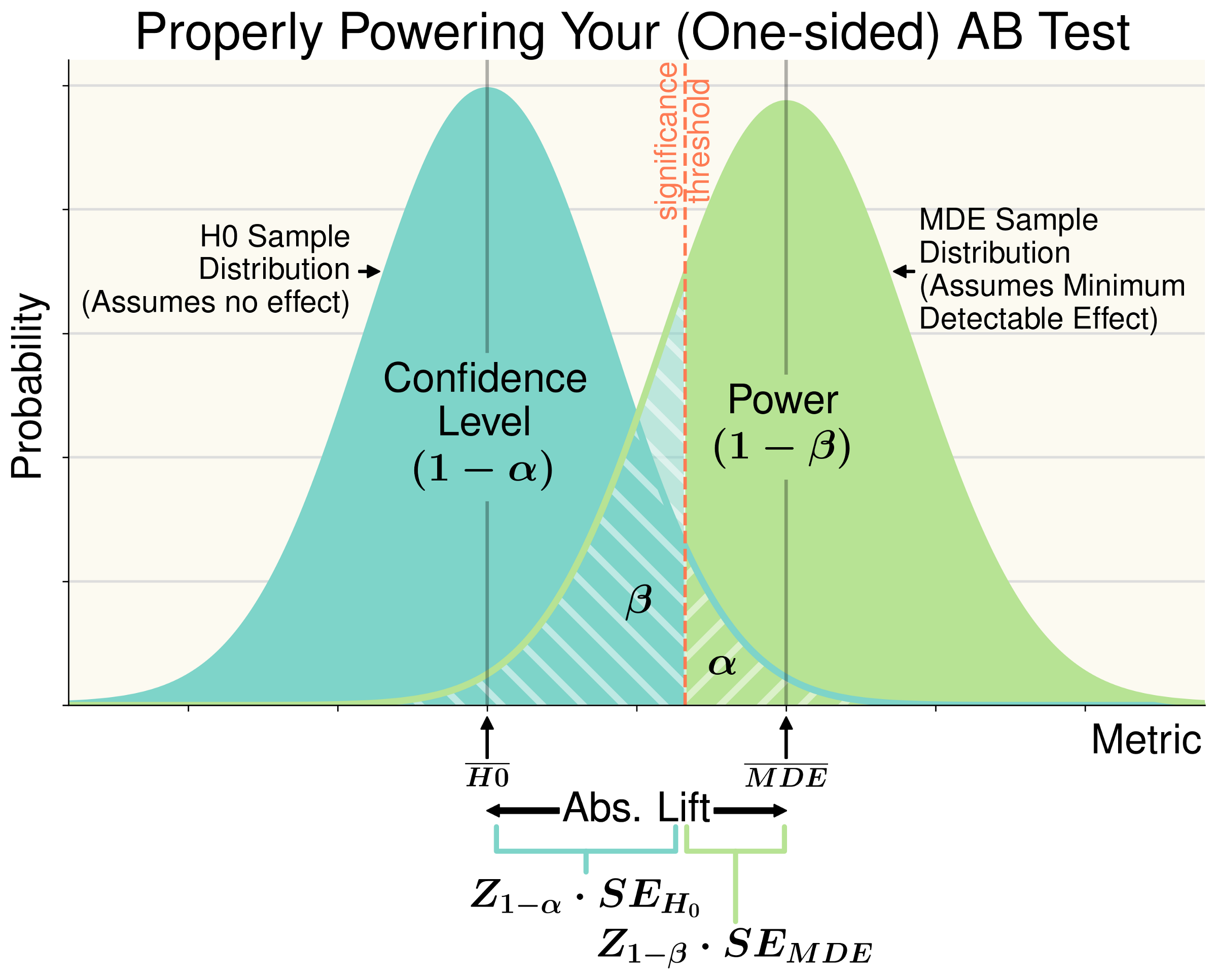 This is the standard framework for understanding the distribution of outcomes in an A/B test and calculating sample sizes. The above leads to the following formula:

Solving this requires solving two different standard errors, SE(H0) and SE(MDE). Each standard error reflects the distribution of a comparison (between A and B). Whenever we compare two groups, the resulting variance is the sum of each group’s variance. SE(H0) is the standard error of the null hypothesis, H0 (no effect). Since there’s no effect, both group A and B have the same standard deviation, σ₀.

SE(MDE) is the standard error of the minimum detectable effect. The MDE (test group) likely has a different standard deviation, but it’s mathematically convenient to assume they are the same. This simplification is fairly accurate for small test effects which is when measuring sample sizes is the most critical (large effects require less samples and don’t generally have power concerns). In the end, this leads to SE(H0) = SE(MDE).

I’ll save you the tedious algebra, but further simplification produces:

We have an estimate for every term here except that radical expression with nA and nB. Solving this would produce a relationship between nA and nB. What’s more useful is specifying a split ratio (r). For the canonical 50/50 test, r = 0.5. But it’s common for product teams to ship a feature to 10% of users in cases where you want to be cautious (r=0.1), or a 90/10 test if you want to broadly ship a feature, but still want to measure its effect (r=0.9). We can replace nA and nB with ratio (r) and total samples (nTotal = nA + nB) as follows:

This formula has many advantages over what you may find elsewhere:

If you have a proportion metric, go ahead and use:

Otherwise, you can estimate standard deviation from your current data.